The old maxim..."Who said you can't teach an old dog new tricks" works perfectly for old looms. Here is a terrific story sent to me by some inspiring blog readers.
"My wife and I bought an aging Macomber 40” loom about twelve years ago. Contacting Macomber, we were able to ascertain that it had been built in Saugus in 1953.

Undaunted, we disassembled it, cleaned and varnished all the woodwork, and renewed the fasteners. The loom had only four shafts, but a castle that would accommodate ten. As a metal sculptor, I was able to duplicate the  existing shafts, jacks, lamms, and treadles such that we now have a ten shaft loom. My wife (the weaver; I am the LT --- the loom tech) has turned out scarves, blankets, fabric and many other beautiful woven objects. She has always wanted to weave a rug, but was uncertain as to whether that would work out well on a jack loom. We decided to gamble on altering the existing loom to make it as compatible as possible with the somewhat more robust demands of rug weaving.

The first step, in order to provide greater tension on the warp, was to increase the distance between the shafts and the back beam. We were able to move the entire back beam structure---as it was---to increase the warp depth by some 30”. The supporting horizontal black metal bar can be raised to give access when dressing the loom. At the same time, we put sturdy metal braces on all four corners of the castle structure to reduce any side-to-side motion. The entire loom is also bolted to the floor and to the studs in the adjoining wall. The apron ribbon on all three beams is “Mule” tape, a tape used by electricians. It has a breaking strength of 2500 pounds, is very thin and does not stretch. 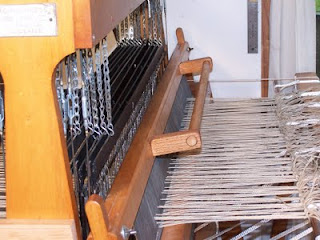 From a discarded loom we were also able to add a second, plain warp beam to the already existing sectional beam, and to create a second back beam to accommodate the warp from this second warp beam. The raddles, and temples we made ourselves and we were fortunate enough to have an extra 12-dent reed, which we altered to a 6-dent one.

The rods that connect the jacks and lamms have always distressed me with their tendency to bend and stretch. To correct them such that their tension is equal and the lamms lay in a smooth line, we spliced small turnbuckles, available from the local hardware store, in line with the rods. This allows tightening or loosening of the rods as needed.

Following Peter Collingwood’s recommendations of “a pound of beater weight per inch of warp” we added two 20 pound steel bars to the beater, and to make it easier to handle, also added a handle.

Of all these innovations, my favorite is the catch for the movable bars that allow the breast beam to be lowered to the floor when dressing the loom. With a simple notch filed into the bar and a screw in the vertical wooden member, the bar drops onto the screw as the breast beam is lowered, a huge help for those of us limited to having only two hands.

A successful sample has been woven. The linen warp in the pictures is for the first finished rug, which will be soon started."

Thanks Reese for sharing your story! I still have so much to share...and so little time!   Check out the local newspaper story on my trip. I have been busy with teaching, but now...alas studio time!

Thanks to all for your orders, questions and encouragement! 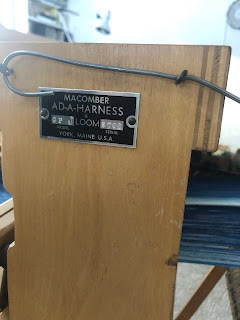 This is a PDF compilation of all the blog posts with lots of photos and TLC instructions for your Macomber Loom. It is an emailed PDF that you can print or save.

I am happy to speak with you about private lessons, advice on your loom and all manners of weaving: drafting, fabric analysis, designing, color and weave effects, rug/tapestry weaving, double weaves, warping your loom and much more. I offer one on one coaching and support. Please contact me to schedule a session! Happy weaving!! Sarah(at) sarahdhaskell(dot)com

Sarah D. Haskell
I am a visual artist, working both in my own studio and out in communities, schools and hospitals. My work is founded in a quest for truth and beauty.